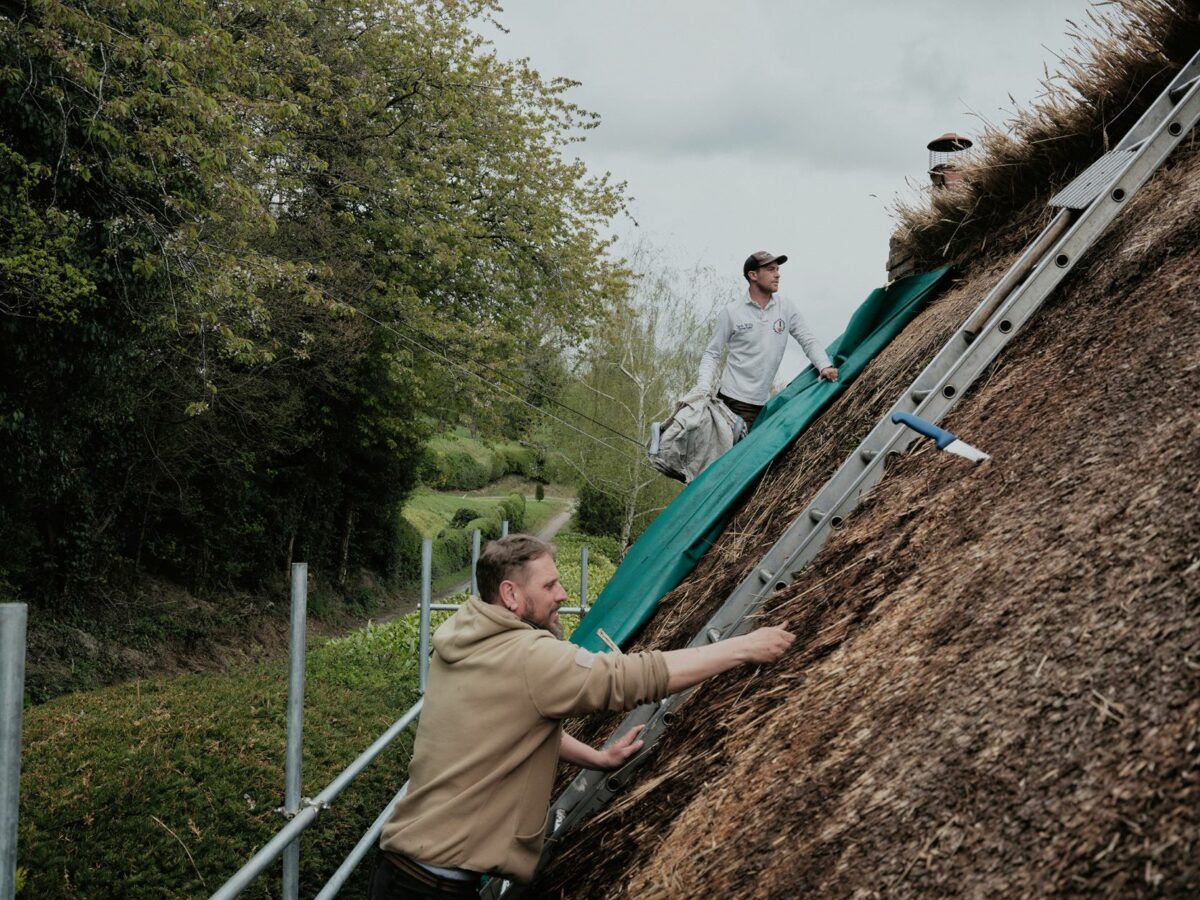 Unless you are a thatcher, you are unlikely ever to have seen a thatched roof close-up. They look pillowy and bulbous from ground level, but are quite different when they are within touching distance. You immediately see there is stringent logic to the way the straw has been laid, a neatness that has the rigour and regularity of lines ruled in an exercise book.

Each individual piece of straw functions like a thin, elongated tile, overlapping but not quite covering the one below. It’s the straightness of a single piece of straw that makes it hard for a layperson to see how it can be coaxed into the sculptural loops and curves found on many thatched roofs.

The particular one I am looking at, in rural Herefordshire, is the work of Joe Thornton, a master thatcher, and his apprentice Jack Richardson. For Joe, thatching is in the blood: he learned the craft from his father. Jack is a QEST AHS Ltd Apprentice Scholar and Joe’s first, and has been with him for nearly three years.

“I knew Joe for a long while before I became his apprentice,” says Jack. “I helped him out when I was at school, doing a bit of labouring in the holidays. I spoke to him about an apprenticeship back then, but Joe didn’t feel ready. So I went and did other things until, one day, Joe gave me a call and asked if was still interested.”

Joe explains his initial doubts: “I wanted to be sure I had the knowledge before I passed it on. Some people start to teach the craft when they’ve only been at it seven years or so. I’ve been doing it for 25, and I’d say you can’t call yourself a master until you have at least 10 under your belt.”

Joe is a man with a long view of the thatcher’s art and a real sense of history. He talks about how thatched roofs across England were torn off after the First World War because there was a shortage of thatchers to maintain them. He can easily spot slate-roofed houses that must once have been thatched: “The pitch is much steeper, and the tiles look skinny and disproportionate.”

Part of his work these days, he says, is replacing roofs that were lost a century ago. But mostly it is a matter of renewing longstanding thatch, since nearly all the buildings that still have it are listed. That involves overlaying compacted layers of thatch close to the eaves that can date back hundreds of years. It is never removed, not least because it often forms part of the interior ceiling. This layer is sometimes blackened with soot, says Joe. “Because it was laid when there were no chimneys, just a firepit inside the building.”

Jack is more of a listener than a talker – a good quality in an apprentice. Up at roof level, he pulls out a single straw to show how the thatch underneath remains golden and fresh, 15 years after the exposed layer has turned ash-grey. Then he slides the straw into place like a cabinetmaker testing the action of a drawer. “A lot of the work is done by hand,” he says. “You push the thatch into place with your palm, working in lines, building it from the bottom. Then you tap it with a legget, to crisp it up.”

A legget is a bizarre looking tool, like a sort of square aluminium griddle pan with an axe handle. The surface has a series of ridges that catch individual straws to ease them into alignment. “That’s a line legget,” says Jack. “There’s a different one with round indentations that we use to go over the thatch and give a really smooth finish.”

The legget is any thatcher’s main tool, and when Joe began working for his father, his first job was making them out of wood. “They were basically planks with bits of curtain track or copper pipe attached. These metal leggets are manufactured by specialist suppliers, fortunately for Jack.”

The other tools of the trade are few, but are “not the kind of thing you can get at B&Q. Our spar hooks, for example, are made by a blacksmith who specialises in thatchers’ kit,” says Joe. A spar hook is not a hook at all but a broad knife, shaped like an eagle’s beak and just as dangerous. It is used for making the fixings that hold bunches of thatch to the roof.

Jack demonstrates how this is done. He taps the knife into the sawn end of a length of hazel, then twists the blade to the side to split the branch down the middle. He pushes down, then twists again, until the branch falls in two. Each half is halved and halved again, making eight lengths that are pliable enough to be twisted into U-shapes, like wooden croquet hoops. Add a sharp three-sided point to each end and this is the finished item, a large organic staple that can be driven into the thatch to hold the new coat down. There are thousands of these spars in any thatched roof, all of them hidden from view.

Or nearly all. The same split hazel is used on the “ridge”, a raised topknot of thatch that runs the length of the roofline, sealing it like a stoppered bottle. Here the spars can’t be concealed, so they are made into latticework that is both decorative and functional, like the stitching on a satchel or the embroidery on the yoke of a dress. Jack has only just started to master this creative part of a thatcher’s job, which also includes incising patterns into the ridge: curls and swags like on the edge of a gilt picture frame. In time he may also learn to make the straw animals, which some clients like to use to embellish their roofs.

But all that will come later. For now, says Jack, “I am focusing on getting the main coatwork off pat. There are some aspects I still haven’t tackled, such as a ‘valley’, where two runs of thatch have to join at an angle.”

Joe says there are various skills and techniques that he hasn’t had the opportunity to show Jack yet. “We do about 10 houses a year, 12 in a good year. So it will take the whole apprenticeship at least for Jack to encounter everything a master thatcher needs to know. In the meantime, we cover every step 100 per cent before we move on. We never say ‘that’s good enough’, because Jack is practising on people’s properties, and we are very conscious of that.”

It sounds like managing the apprentice relationship is pretty time-consuming. “Yes it is,” says Joe. “I enjoy teaching Jack, but it naturally takes time out of the day. And that’s where the funding from QEST takes the pressure off a bit. It helps with Jack’s wages, and it means I can make sure he has a total grasp of the craft. And anyway, everything in thatching is slow. That’s because we touch every last straw on every roof.” Jack nods in agreement. “I’m 25 now, and by the time I’m 30 I’ll be getting there,” he says. “I’m very happy doing this because I’m where I’ve long wanted to be. This is my job forever.”

This article was written by Jonathan Bastable and originally appeared in the Summer 2022 issue of the QEST Magazine. Jonathan is a travel writer who also writes on art, history and design. Photos by Sam Dearden. 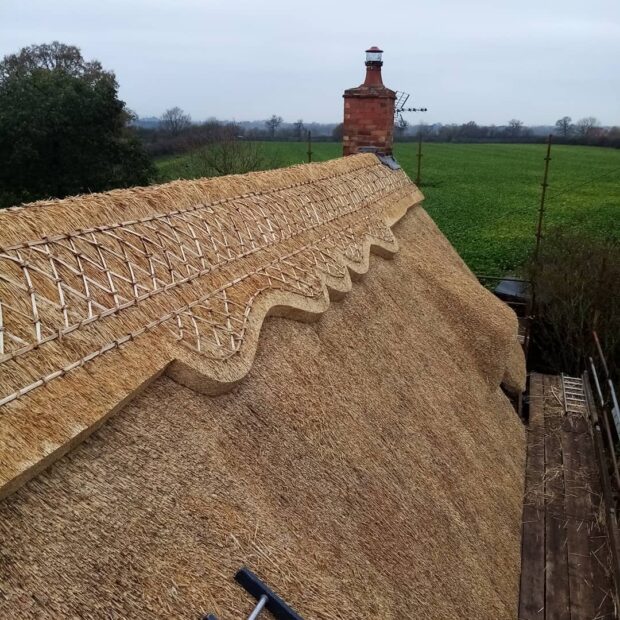