On the tiles by Hettie Judah

An artist and designer working in ceramics, Frances Priest looks to historic pattern books, architectural plans and archives of decorative design in her research. She brings together patterned elements from diverse traditions in work ranging from small tactile sculpture to bespoke tiling schemes. What unites Frances’s work and her source material, she says, is drawing: “The process by which languages of ornament are shared.”

Frances is fascinated by the way ornamentation migrates, from a point of origin in nature or geometry, through the architectural traditions of different cultures, to objects glorious or mundane: the curls of an acanthus leaf that creep from a marble column to encaustic tiles to patterned linoleum. In her Edinburgh studio, she draws ornamental motifs from diverse traditions into the surface of moulded clay forms, then trims and glazes them with such crisp precision that the finished bowls and tiles appear collaged together from fragments.

Her work explores “the journeys and movements of languages of ornament and motifs, how we use them, where they come from, and where they end up,” she says. The results are “playful and joyful”, thanks to Frances’s bold combinations of colour – duck egg blue, coral, sunshine yellow – achieved by mixing glaze with a watercolourist’s delicacy.

For the 2015 project Patterns of Flora | Mapping Seven Raasay Habitats for Atlas Arts on the Isle of Skye, Frances drew the plant life of different island environments, from bogland to shore, and translated them into sets of stylised patterns. These formed the basis of ceramic tiles and door handles made by Frances and installed around Raasay House. Like most of her ceramic work up to that point, they were delicate, diminutive objects: sympathetic modifications of an existing interior.

A recent design project for the Royal Edinburgh Hospital has completely changed the scale at which Frances imagines herself working in the future. Commissioned by the Edinburgh Lothian Health Foundation for a hospital that specialises in mental health, she was tasked with lifting the dull mood of a busy corridor. In her original proposal, Frances imagined a subtle intervention of the kind she had made at Raasay House. It was a scale of output well-suited to a ceramic artist working with great attention to detail, alone in her studio.

Researching the tiles used to grandiose effect in Victorian municipal buildings took Frances to the Jackfield Tile Museum in Telford, which shares its site with a heritage tile manufacturer. “Part of going to the museum is a tour around the Craven Dunnill Jackfield factory,” she recalls. “As I walked around the factory, I thought, ‘What am I doing here? I need to work with these guys!’ It made sense conceptually, but it also meant that I could scale up.” Frances went back to the commissioning body and together they agreed on a larger, transformative project.

Installed in September 2019, Frances’s Tiled Corridor is made of bespoke, glazed ceramics manufactured by Craven Dunnill Jackfield. Its glowing bands of ochre and teal were inspired by tiles used in the stairways of Craig House Hospital, the Victorian precursor to Royal Edinburgh Hospital. Colour was a key element of the project: having consulted patients and staff at the hospital, a consistent request was to create a work that brightened up a drab institutional space.

“I see it as a real collaboration between myself and Craven Dunnill Jackfield; I couldn’t have achieved it without them,” says Frances. “Their skills, their craftsmanship, their manufacturing capabilities are an integral part of the finished piece.” Founded in 1872, they are “the only manufacturer of encaustic tiles in the UK”, Frances explains. The factory creates replacement tiles for heritage buildings around the world – they are responsible for ongoing restoration work on the Houses of Parliament, for example – and have a vast library of glazes that allows them to match old stock. “This library isn’t just colour,” says Frances. “It’s a history of the projects that they’ve worked on: it’s a history of buildings and places.”

Frances’s design for the Royal Edinburgh Hospital modifies familiar elements from Victorian tiles. Shapes that would otherwise have performed as borders or central roundels were expanded to become the main event. Rather than installing the tiles in a continuous repeating pattern, Frances designed a scheme in which colours and forms echo and repeat in waves. Along the length of the corridor, glossy blues and yellows pulse from palest primrose to a deep sandy yellow and from periwinkle to indigo.

Visiting Craven Dunnill Jackfield while developing the corridor tiles, Frances experienced a transformative moment herself. Chatting to one of the senior members of staff on the factory floor, she noticed one of her postcards on his pinboard. Suddenly her perspective on the collaboration tilted: it was no longer “big factory and little me” – instead, she started to understand it as “a meeting of craftspeople”.

By the time the corridor was installed, Frances had become fascinated by the tile factory and its archive. Her QEST Johnnie Walker Scholarship will allow her to explore both further, supporting her through a technical training period and research at Craven Dunnill Jackfield. Much already feels familiar: “Clay is clay, so there’s dust on the floor, there’s a pile of clay for recycling. They’re using very similar processes to me in lots of ways, but scaled up,” she says. “QEST will allow me to develop my knowledge and understanding of production processes – what’s involved, how much they cost and the time that they take – so that when I engage with future public projects, or work with interior designers, I have in-depth knowledge of how I can achieve things.”

Already working on a private architectural commission in London, Frances has a sense of the new avenues such specialist knowledge could open to her. “The idea that you could be using an encaustic tile process to do one-off work and things that have a contemporary reference point feels exciting,” she says. “There’s a lot of potential there.”

Frances’s QEST research will also take her to the paper archives of the Mintons ceramic works in Stoke-on Trent. “I’m starting to work more closely with decorative art historians, so that I’ve got a stronger knowledge of the lineage and movement of these motifs,” she says. “I’m also in discussion with a curator in the V&A’s Middle Eastern collection. We’ve been talking about a project where I look at Owen Jones’s Plans, Elevations, Sections, and Details Of The Alhambra, 1834, and develop a collection of work based on that.”

During Frances’s training period, she’ll alternate between time on the shop floor learning manufacturing processes, and periods exploring how they might be applied to new ideas and designs. Craven Dunnill Jackfield has no shortage of demand for restoration projects, but Frances thinks collaborations with contemporary artists and designers are important to help the factory evolve, and ensure their specialist knowledge is passed down to a new generation. “At the time the factory was set up, they were real pioneers of technology,” she says. “It’s nice to think they’re still potentially pioneers.”

Frances sees architectural ceramics in step with contemporary ideals of building well for the long term. Tiled surfaces are easy to maintain, and the demands involved in design and manufacture suggest a commitment to durable construction. These aren’t design elements to be installed and then discarded a few years later: they can last for centuries. Frances’s influences are historical, but as she points out, well-made ceramic tiles “fit with how we think about longevity and sustainability in designing and making things today”.

This article was written by Hettie Judah with images by Pascal Vossen. It originally appeared in the Summer 2021 issue of the QEST Magazine. 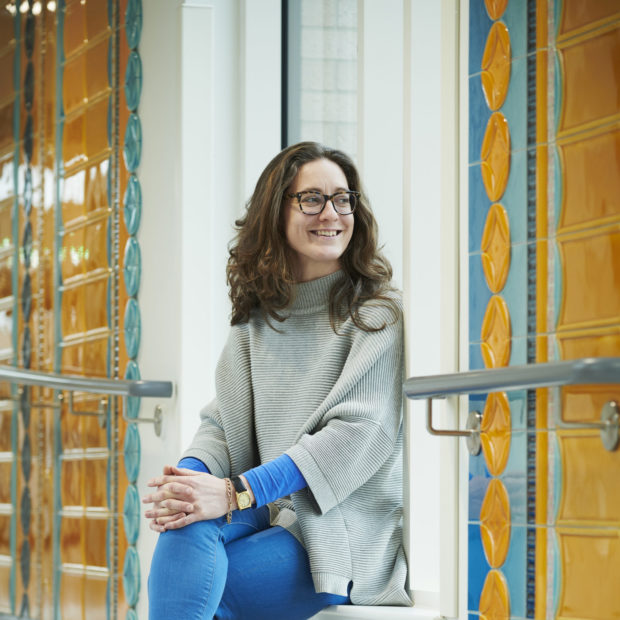